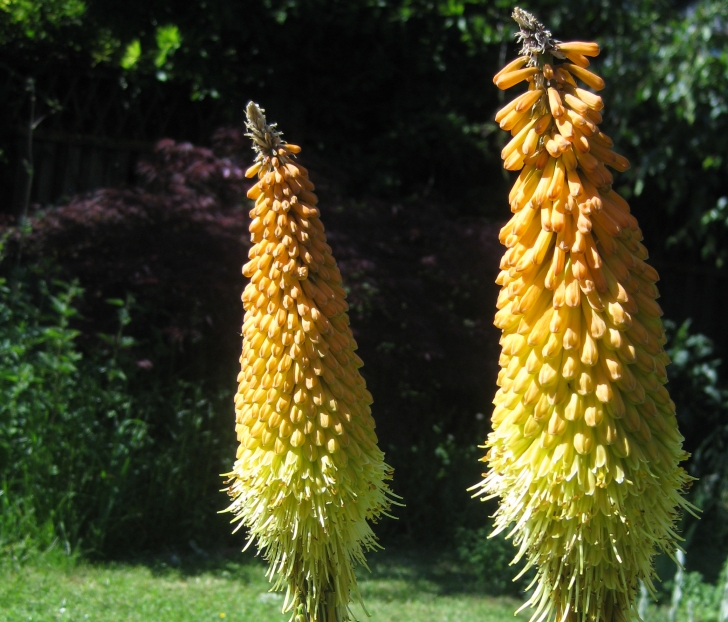 In 2020 the ongoing pandemic prevented most travel and diminished opportunities for photographic outdoor activities. However, on a nice day in May when our Garden was in full bloom, I took my Plaubel Peco Junior and exposed just one film with eight frames. While some of beauty of the plants and their blooms comes from the spectacular colors, another attraction lies in the shape of some plants. The latter is something well suitable to be captured in monochrome. The ILFORD FP4 placed at ISO 100 was developed in Rodinal.

The small gallery shows five prints that came out of this garden trip. My intention was to present all photos with a dark background. The sun was bright and so the selected blooms stood out if the time of the shot and the background were chosen right.

For the first plant that caught my attention, I did not even have to enter the garden, it stood right across from our front door. The still closed green blossoms of an annual poppy were in full sunlight and the hedge behind it gave a shadowed background which was lowered in tone in some parts during printing by heavy burning.

Second motive was the bloom of a digitalis plant which is called “Fingerhut” in German (which translates the “thimble”). It stood right in front of a firewood stack with a shadow dark enough to make a good background. Here I took three shots, because I tried to capture a bumblebee who was active at the flower; however, the relative long exposure did not comply with the busy animal. So I printed the shot without the insect.

In case of the third scene with the beautifully shaped nectaroscordum siculum there was no chance to use the natural background as the plant stood in front of our small terrace. There I used a makeshift setting of black cardboard to separate the blooms from the otherwise to busy background. This worked quite well, a small section in the upper left corner showed some reflection from the cardboard; whoever this is no problem to take care of by appropriate burning in the printing process. In this case I chose to capture the scene with a bee just approaching the blossom from below, well aware that its fast movement would blur the insect, a nice contrast to the plant.

For the two flower heads of a red hot poker I had to wait for the sun to reach the right direction so the plant could be placed in front of the dark background as seen below in the digital photo of the scene. These blooms were a special challenge, as the weight on top of the long stem made them rather perceptible to the wind blowing that day and it was hard to catch the plant in a quiet moment.

As the sun was now tuning and leaving most of the plants in unfavorable light, I took the last photo more of less to ‘just fill the film’. Anyway, the Jerusalem sage makes a nice addition to complete the small series of now five frames from our garden in May 2020.