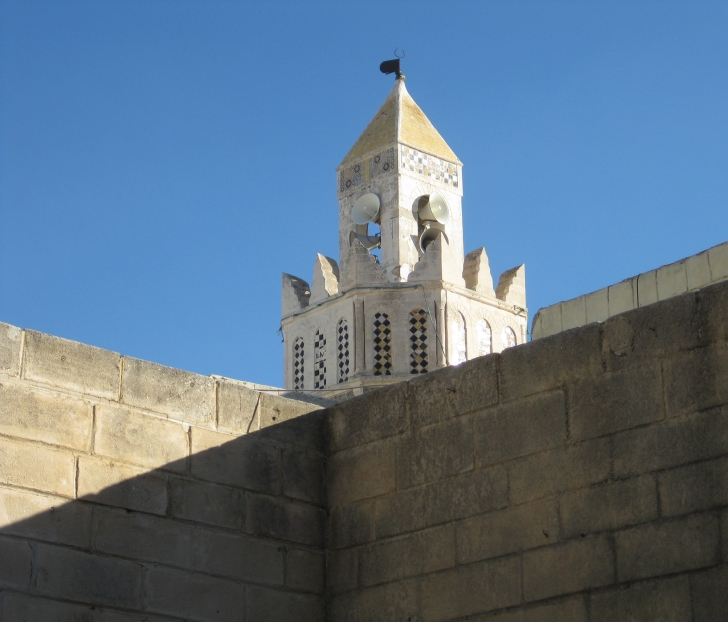 The photos from the gallery Tunisia were all made with the smallest camera I own, a Rollei 35S with a 2.8/40 Sonnar lens. This compact 24×36 mm camera with full metal casing has a very good feel in the hand, considering the small size. The only disadvantage is that the built in light meter usually depends on the no longer available 625 batteries. I was lucky to find a used set of Sigma filters for the camera with 30.5 mm thread in red, orange, yellow, and ND4x. Particularly the orange filter helped to give the blue Tunisian sky the right tone in the black and white prints. I was not able to take any larger equipment on the trip but could at least make a few decent photos with the small format. Unfortunately the film got some fog, as on the return trip, the security at the airport did not agree to do a manual check of the film, but persisted on a X-ray.

A point to remember was focusing. When you are used to take photos with a view camera, you do not have to remember to set the focus, it is an inherent process, because composition and focusing is being done on the ground glass. With the range finder camera, it has to be set by adjusting the front lens according to a best guess of the distances.

Due to the fixed lens with 40 mm focus length with a slightly wide angle perspective, some of the photos had to be cropped which can be a challenge in terms of grain with the small negative format.

The first photos in the gallery were all made during a nice afternoon walk though the old city of Sousse. Many of the motifs look great in color as shown below in a few examples; however, the black and white has a certain attraction with the often strong contrast in the Mediterranean sun.

The scene with the minaret in the center was rather straight forward to print on grade 2.5. The orange filter gave the sky enough depth, only on the lower left, the part with the shop and a small area right of the palm tree on the right side had to be dodged a little with 6/12th and 3/12th of an f-stop, respectively.

The photo of the little shop offering different cans, pots, and chairs needed heavy cropping to avoid showing my shadow, which I had not noticed in the tiny viewfinder when taking the photo.

Many doors throughout the old city show nice ornaments and make great black and white photos no matter, whether they are well maintained and painted, or whether they show traces of their age and the daily life. Two examples were added to the gallery, both printed straight on grade 3.5.

The Sun behind the Mosque scene was a little tricky to print. The first exposure was with a relative high grade (3.5) and some dodging of the lower right side with 6/12th of an f-stop. In order to give the sky enough depth and to show where the sun was, the upper part got a second exposure with grade 0 for 6/12th of an f-stop.

Walking by the empty beach, I noticed the tracks from a machine used to clean and flatten the sand. My imagination was a rather graphical interpretation of the scene and therefor printed the photo first with a grade of 4.5 and in a second step to add some details the sun lit part was given an additional exposure with grade 0 at about half the original time.

The images of the gravestones, the Great Mosque, and the view trough the carpet shop window were made in Kairouan. The gravestone scene had to be cropped on the top because of some modern buildings in the background which could not be avoided due to the fixed focal length. The image of the Great Mosque was printed on grade 3. For the view through the shop window I used grade 1 and a vignette to burn the window section with 6/12th of an f-stop.

The last shots in the gallery are from an aqueduct near Kairouan, which probably suffered some strong damage during an earthquake in AD856. The origin of the Cherichira aqueduct goes back to Roman times; however it was rejuvenated in the Middle Ages to support the growing city of Kairouan with fresh water. The remains of a bridge, crossing a valley at a length of about 200 m shows clear signs of several construction periods and also makes a great motive for black and white photos. Here a view camera with the option to alter the perspective would have been great (may be next time), but a few shots with the 40 mm fixed lens were also worth to try. For all three images a basic exposure with grade 3 was used. The photo with the cactus on the wall was burned in in the lower right section and in the last scene the bridge itself was dodged with 4/12 of an f-stop.