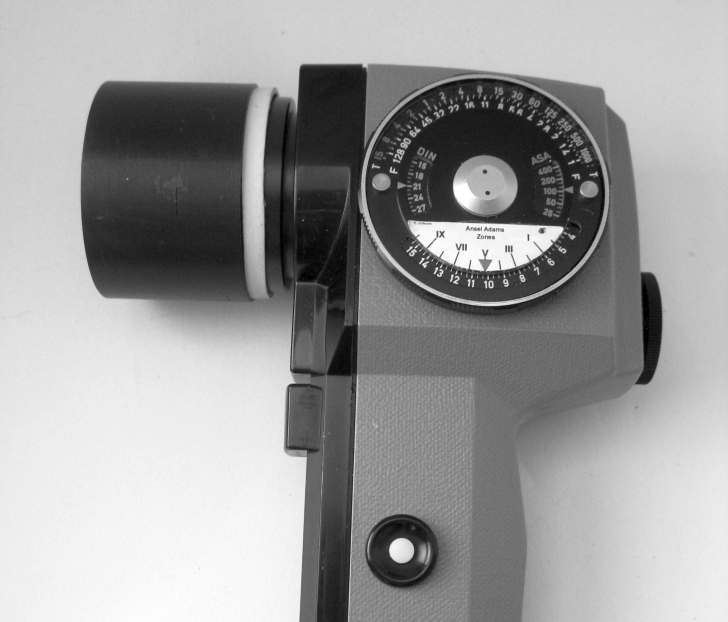 For years I had been using a Gossen Lunasix 3 exposure meter when taking photos with the Mamiya M645. When I started to work with the Plaubel Peco, I looked for an alternative for the Gossen. A serious problem with many older meters, whether standalone or built into cameras, are the batteries. For environmental reasons, production of the mercury containing PX625 1.35 V batteries was stopped. As it is not trivial to replace these, a lot of the old gear, though still in good working condition, is not practical anymore.

So after I learned about the tremendous advantages of spot-metering, I got an analog Pentax Spotmeter V exposure meter. This serves very well, particularly after I added a little zone scale the its dial. The Pentax uses LR44 batteries which are still available. Measuring is with a silicon photo diode cell and a moving coil instrument is shown in the screen where exposure values (EV) from 1 to 19can be read. Only disadvantage, under low light conditions it gets hard to read the instrument even though the meter has a little scale light to reduce this problem. As I completely depended on the instrument when taking photos, I looked from time to time for a second one as back up, or a different one with improved performance.

At one point I got a Gossen Spot Master reasonably priced in an auction. Though this is for sure a superb instrument, after some trials I sold it again. As I have to wear bifocal glasses, I had trouble seeing the scales on the little screen of the instrument. I also was not a big fan of the many buttons that had to be pushed to handle the menus and finally come to a reading.

Recently I saw a Soligor Digital Spot Sensor and got it. It looks like a little bit smaller version of the Pentax. It uses the common 9 V block batteries (6LR61) which is a big plus as they are easy to get. Like the Pentax meter it is a ‘single button’ instrument, once the main button is pushed the EV of the 1° measuring cone is shown by well readable red luminous numbers, like the ones used in old pocket calculators. The dialing scale of this instrument are around the lens of the instrument. Here also a zone scale can easily be attached as shown below.

In order to test the performance of the ‘new’ instrument, I compared its readings to the Pentax with which I was always satisfied. This comparison is easy by aiming with the 1° spot measuring window at the same target under changing light conditions. It turned out that both instruments give very close readings as shown in the graphic below. The black line is the best linear fit between the readings of both instruments and the dashed blue line is 1:1. It shows that the Soligor gives slightly smaller readings at low values. However the scale of the Soligor goes down to zero, where the Pentax stops at 1.

In order to be able to carry the Soligor with a string around the neck, I made a small brass fitting which can be attached to the tripod thread at the bottom of the handle of the instrument.