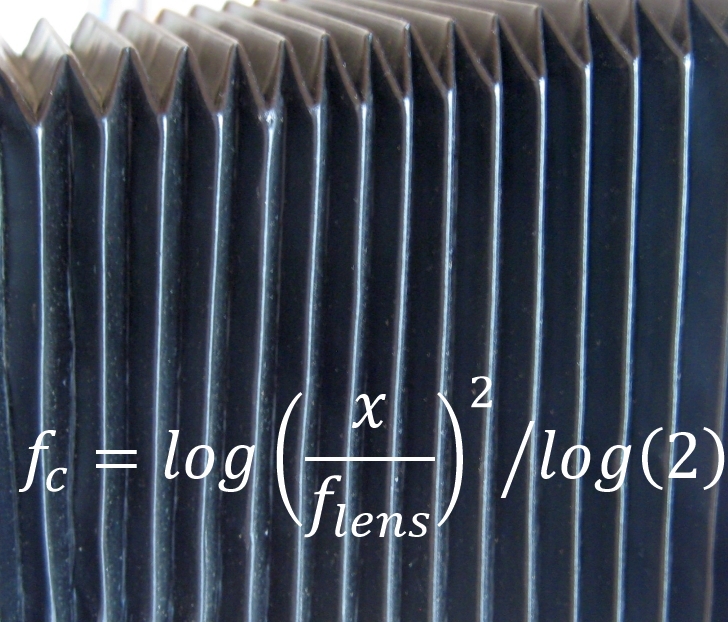 In order to make life easier, I prepared tow scales for the monorail of my Plaubel PL69 which allow a direct reading of the exposure correction in fractions of f-stops without any measuring.

For the PL69 small aluminum scales are available which indicate the position of the front standard for focusing to certain distances (one scale for each focal length). These scales can be fixed to the monorail. In addition, a similar scale indicating the ‘zero’ position of the back standard is needed. Small tongues on the standards allow precise positioning. All new scales were adjusted with respect to this ‘zero’ indicator.

In a first step, the position of the front standard along the rail when focused at infinity had to be experimentally determined for each lens. I set up the camera and focused at the towers of a small church at the horizon, when looking out of my office. For this setting, the distance between the current front standard position and the end of the monorail was measured with calipers. This distance later determined the zero position of each correction scale.

In the next step a simple spread sheet and the above given equation were used to determine at which locations equivalents of 1/3 of an f-stop were reached for the correction factor. A graphic program was used next to plot a scale for each of my lenses. For better readability different colors were chosen for each scale. In the figure below, the diamonds indicate the position of the front standard along the scale and are labeled with the f-stop correction.

The scales for the lenses were arranged so they fit on two 8 mm wide strips. These were printed on paper, laminated, and glued to the monorail at the correct position. (The reader might notice in the above picture, that the scales for the 47 mm and 65 mm lens have their zero position (focus at infinity) at the right side of the position of the 75 mm lens, meaning further away from the back standard. This is due to the fact that the 47 and 65 mm lenses are mounted to the back of the front standard with a custom made construction, because if mounted to the front side, they cannot be focused to infinity. This basically has the same effect as a recessed lens-board.)

Now, when taking photos, it has become routine after focusing to check the corresponding scale on the rail and read and apply the correction. In the example shown below, the correction for the 90 mm Schneider Super Angulon (blue scale) would be 1 1/3 f-stops.