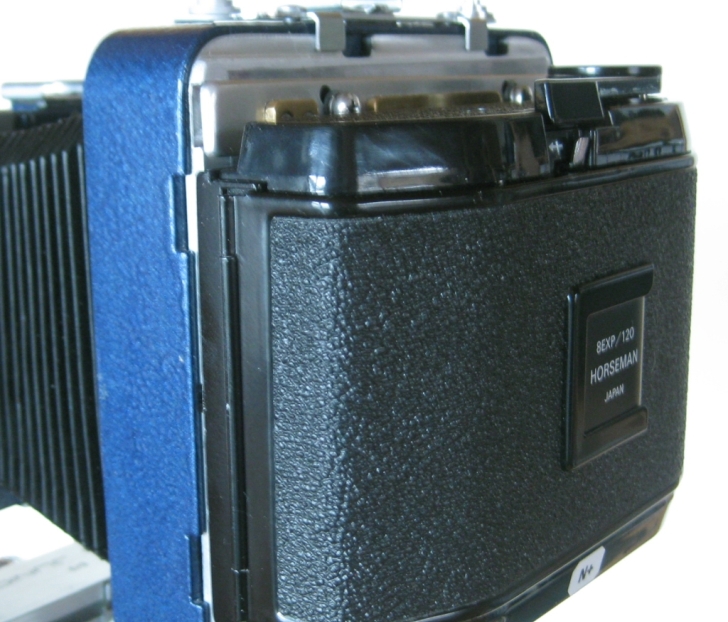 In its original version the Plaubel PL69 is equipped with a universal back, that can take 6.5×9 single sheet metal cassettes or 6×9 roll film cassettes. The latter were sold under the Plaubel and Rado label. Basically two generations of the roll film cassettes exist, the older with a red viewing window to read the frame marks on the film back as the only indicator for frame advancement and a newer version with a mechanical frame counter. Inserts are available to reduce the frames to 6×6 cm and even 4.5×6 cm. I was also able to purchase by auction a special cassette for 135 film and 24×36 mm standard frame size (though I have never used it).

My cassettes with the mechanical frame counter show some wear and advancing correctly to the next frame can be a challenge, so I started to prefer the older cassettes with the viewing window for the frame numbers. Anyway these sheet metal cassettes do not guarantee a perfect flat film when exposing it. Even if the film is advanced right before exposure problems of all over sharpness might occur due to some film buckling. Much more technically advanced are cassettes from later times, e.g. Linhof or Horseman. When I came across a reasonably priced Horseman cassette, I decided to design and build a complete new back-plate including a ground-glass holder and the glass.

First the plate which would carry the ground-glass holder or the film cassette was milled from a 12×12 cm aluminum plate of 2 mm thickness. This plate had to get the appropriate notches, so it can be attached to the camera in landscape and portrait settings. It got a fixed rail at the bottom and a moveable rail at the top to insert and secure the glass holder and film cassette, respectively. The profile of the rails and their positions were determined by the size and shape of the Horseman cassette.

As the cassettes do use a narrow bulge on the back to assure the correct positioning, the base plate had to receive a matching groove by using a small 2 mm milling cutter. In addition to this groove necessary to place the cassette, a frame of grooves was milled around the future rectangular image hole which later received some cellular rubber light seals. And the image hole was pre-cut with a jigsaw and then milled to the final measures, again with a 2 mm milling cutter.

The next challenge was the design of the ground-glass holder. Finally I decided on using a sandwich of two 2 mm thick aluminum plates. This had the advantage that the first plate, the one that would sit in the base plate, would function as a flat support for the ground-glass. The second plate became practically a frame for the glass and also holding two small aluminum stripes, which hold the glass in place. Three M2 screws were positioned in the first of the sandwiched plates, so that they reach into the grove for the cassette positioning and thus guarantee a correct positioning of the ground glass.

From a local shop selling fire extinguishing equipment I bought some glass, pre-cut to the right size for the glass-holder. This type of glass is the breakable glass for fire alarm boxes and only 1 mm thick. With grinding powder of decreasing size I ground the glass until there was a good compromise between brightness and coarseness. Eventually I was able to buy a Toyo View Fresnel lens of 62×92 mm, one of the best buys I ever made, because it greatly increased the brightness of the scene on the ground-glass. Actually the size of this lens determined the size of my glass and the hole in the frame holder. The Fresnel lens was mounted on the lens side of the new holder and in-between it and the ground glass a thin foil with a laser printed centimeter-grid was placed.

Though I had measured the position of the ground-glass as good as I could with calipers, the final position had to be calibrated. I used the common 45° inclined scale and took several photos with two different lenses. In two iterations during which I added pieces of thin foil to change the position of the glass with respect to the frame, I came to a good fit of the ground side of the glass and the film in the Horseman cassette. Actually using the Horseman cassettes has made life much easier and (hopefully) the films more flat during exposure. I have now three cassettes which are labeled N-, N, and N+ to indicate the adjusted development.