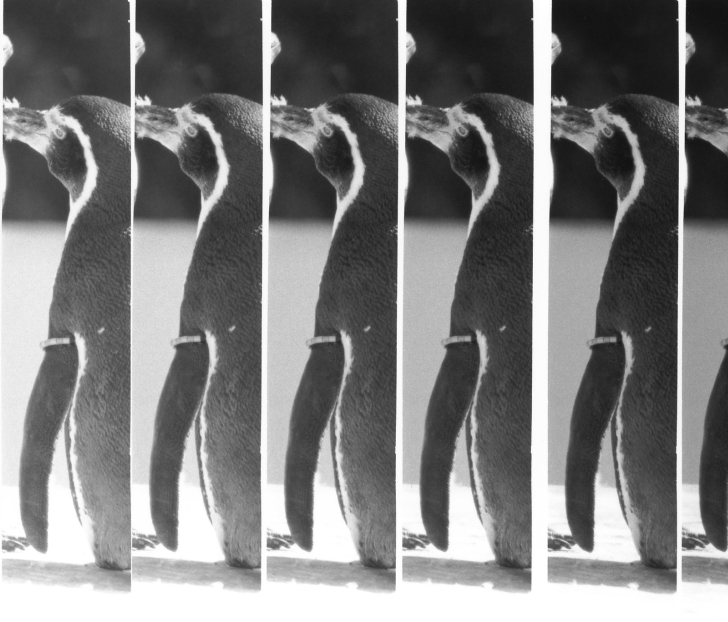 Last year we spent a very nice summer day in the Zoo of Cologne. I took my Mamiya 645 Pro and mainly used the 500 m lens on occasions even with a 2x tele-converter as my intention was to concentrate on the animals or even parts of them and to avoid fences and the zoo environment, e.g. other visitors. For short reaction time, the usual hooded reflex screen finder was replaced by a prism viewfinder with TTL measurement. Though I made two mistakes, it was fun and some shots turned out well. The fist mistake was the type of film chosen, I used ILFORD FP4 plus rated at 100 ASA; a 400 ASA HP5 plus film would have been better to freeze movements of the animals. The second mistake was the tripod, I took my wooden Berlebach with a Manfrotto ball-head. This is usually fully sufficient to give good support for the Mamiya 645; however, with the 500 mm lens the more heavy metal tripod with the 3-way Manfrotto head would have been better. The lens is rather heavy and balancing it with a ball-head can be a challenge.

The two Cheetah were resting in the half shadow. I used a large aperture to narrow the depth of field and to avoid too long exposure times. The grassy foreground received some heavy burning with emphasis on the bottom (the first test print with no burning is shown below) and some cropping was necessary in spite of the 1000 mm focal length.

What could be more suitable for a black and white photo than a Zebra? Unfortunately they all were rather far away from the closest possible standpoint, but the one laying by the tree stump made a good motive. I cropped it to panorama type format and placed the animal more to the right side of the image. The bottom was again burned, so was the middle section just above the stump, which ended on zone II which camouflaged a section of the fence visible in the negative and otherwise distracting the view from the Zebra. Below is a scan of the first test print without any burning.

Next came the Giraffes where the light was favorable. It was tricky to follow the always moving animals with the camera on the ball-head as the long lens was pointing upward due to the animal’s long necks. I included two photos in the gallery one with a nice portrait where the Giraffe was directly looking at me and a close up of the neck itself. Actually the latter was a photo I had planned on before the visit and the conditions were right to capture it. The light through the foliage which forms the background outside of the depth of field was burned during printing with grade 0 compared to grade 2 for the print itself.

The three photos of the young Elephants were made from the same spot right at the fence; however, they took quite some patience. Even tough one 120 rollfilm takes 15 of the 4.5×6 cm frames with the Mamiya 645 (compared to the eight frames when shooting 6×9 cm with the Plaubel Peco Junior), you try to wait for the right moment to expose and not to waist too much film; quite different probably from dozens of shots you would take digitally. The first two photos make a nice pair with the Elephants coming from opposite sites into the frame. I like the third photo best, the animals’ head is full in focus; however, the moving straw grasped by the Elephant’s trunk shows some in-motion unsharpness.

The Penguin’s compound was sitting in full bright sunshine, and it was hard to find a standpoint suited for a good view to the animals and with a decent background (there were many visitors). The platform on which the animals are standing in the first photo was very bright and thus burned heavily during printing. The first test print without any burning is shown below. The photo with the single Penguin was printed on grade 2 and the whole background (except the animal) received burning with grade 0.

For the next visit I know two mistakes to avoid; however, there are probably more to make (and learn from).

All product and company names are trademarks™ or registered® trademarks of their respective holders. Use of them does not imply any affiliation with or endorsement by them.