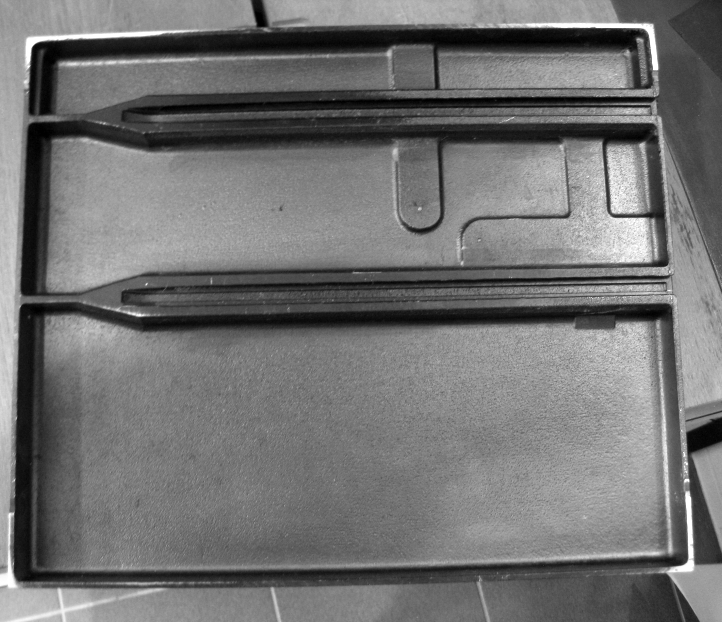 A never ending story in the darkroom: the Easel. Different varieties of easels are available from cheap to reasonable to rather expensive. There are two main purposes: holding the paper flat in place during exposure and allowing for a well-defined rectangular white border. Both sounds easy to achieve; however, in practice not all constructions work that well.

The two main kinds are the two-blade and the four-blade easels. Since I use my Leitz Focomat IIa, I prefer the easels made by Leitz, particularly the ones with two dovetail rails on the bottom (shown on the left). These rails match the clamping system on the baseboard of the enlarger. Nothing is more annoying than a shift of the easel after everything seems set for the exposure, this is past, when the clamping mechanism is used. Once the easel in place, the lever of the clamping device is moved to the front and the easel is pulled tide to the baseboard. And the easels from Leitz guarantee the correct level of the paper above the base board, so the autofocus of the enlarger works correctly.

For a long time, I was using the 18×24 cm four-blade easel from Leitz. This is very well adjustable to all kind of different settings of the frame. However, I always had trouble with at least one corner being not perfectly 90° and one blade always had to be ‘persuaded’ to lay flat down by putting some weight on it. I also own the large two-blade 30 x 40 cm easel from Leitz with a wooden base and used to switch from the smaller to the larger when switching from 18×24 to 24×30 cm paper.

Recently I saw the smaller two-blade easel from Leitz with a full metal base in an auction and got it for a reasonable price. It was not in a good shape and and needed quite some attention before being usable. I completely disassembled the tool, cleaned all parts in an ultrasound bath and lubricated them with Balistol. The counternut of one of the screws to fix the blades, once they are set, was missing. I fabricated a replacement from a small piece of brass. As the surface of the easel was rather worn, I sanded it down smoothed it with 400 grade sandpaper and repainted it with paint from a spray can. (Paint for a heater radiator works very well). I was at first undecided whether to paint it white (so it can be used directly for focusing) or black, so no reflections from the base go back into the paper. The decision was for a matt white and in tests I did not see a difference, whether I used a black cardboard underneath the print or not.

The ‘new’ easel can take both the 18×24 and he 24×30 paper, so I do not have to change easels any more when switching between my favorite formats. At first I was skeptical about a two-blade easel because I had often read that a four-blade is the one to go for. But I am now very pleased with the two-blade version. Two changeable stop units allow a precise setting of the border and a good alignment of the paper. I have prepared two sheets of white paper with measures for up tp 5 cm wide borders along all four sides for my preferred paper sizes. These sheets were laminated and are used to adjust all four borders to the desired size; they work well on both, the two- and four-bladed easels.

All in all, the 24×30 all metal Leitz two-blade easel in now my favorite, producing 90° corners and straight clear edges of the image.