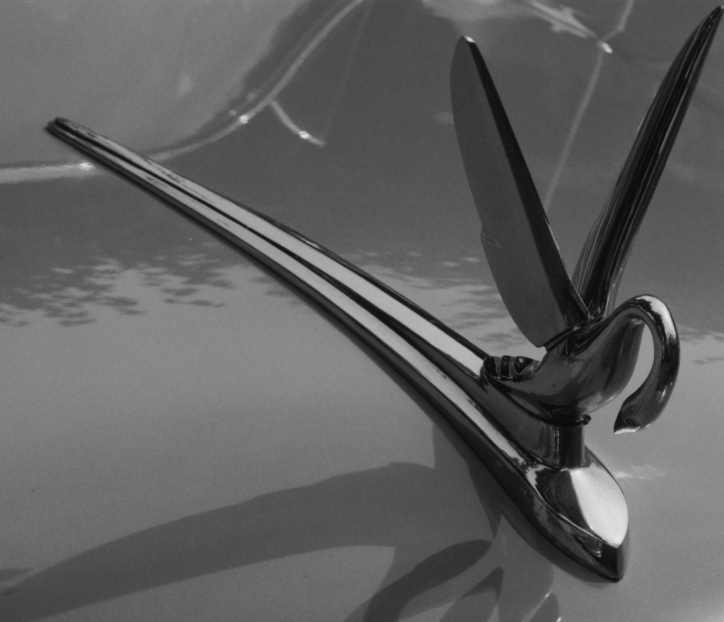 Every year on invitation of the Overather Stadmitte oldtimer cars gather at the Bahnhofsplatz in Overath, some 20 km east of Cologne. In 2019 I visited the old cars with an old camera, my Plaubel Peco Junior.

The weather was great in the morning with sunshine and very few clouds. I first strolled through the car park to spot any interesting motives and think about the best time for photos in terms of the sun position. A major point at such an event are the other visitors. Due to the nice weather and the attractive cars it was rather crowded which does not make the live easy for photos which concentrate on the beauty of the cars. Good ‘whole car’ pictures are almost impossible to take as it is very hard to vision a free standing car in the right light conditions and a well suiting background.

Therefor I decided to concentrate on details, details which stand for the character of these marvels of motorization. A beautiful Packard was the first car to visit. The old Packards had these impressive swan sculpture as a hood ornament and the sun was just right to produce a fine reflection of the swan on the spotless finish of the hood. The visitors were so numerous and close to the car, that the final image had to cropped a little to just concentrate on the car itself and avoid any of the surroundings.

Too many disturbing things surrounded also the nice MG, so I decided to concentrate on the characteristic front with the two big headlights and producing a more panorama like photo. Such cropping is no problem with the medium 6×9 format negatives. Actually the same situation led to the image of the classic Ford Mustang.

One highlight was a Chevrolet Corvette cabriolet in red and white, which translates well into black and white. The car in perfect condition was model for three images, the trunk, one from the side, and one of the interior with a full Jazz band on the dashboard. The latter was a challenge as the camera had to be pointed down quite some and I had to be careful not to come too close to the door. The negative of this image looks fine at the first glance and the basic exposure based on the little figures on the dashboard was easy to determine. However, the first test print showed that some heavy dodging and burning was necessary. The interior below the steering wheel had to be dodged for about 1/3 of the total exposure time and some small parts on the right side were burned using a card with a circular whole and the lower left corner and particularly the very upper left corner had to be burned down heavily. The photo of the side of the Corvette with the characteristic two color painting urged a lot of patience. In order to fit the fender and door, I had to position the camera on the side across the road from the oldtimer. This road was crowded with visitors strolling by, so after setting up the camera I had to wait for a chance to capture the scene without direct blocking or shadowing of the car.

An attractive Magirus fire engine was another motive. The hood was open, when I came by first and the dark motor with the high value ventilator of the air cooled Diesel engine in front of it was ideal for black and white. Some vertical shift of the front lens produced the right perspective for me. When I came by the engine a second time, the hood was closed and this formally asked for a second photo which would nicely pair the first one. Now the logo of Magirus with the capital ‘M’ and a stylized Ulmer Münster was well visible in the center of the hood with the ventilator behind it.

So all in all a nice half day of shooting, eight photos and two weeks of fun in the darkroom.