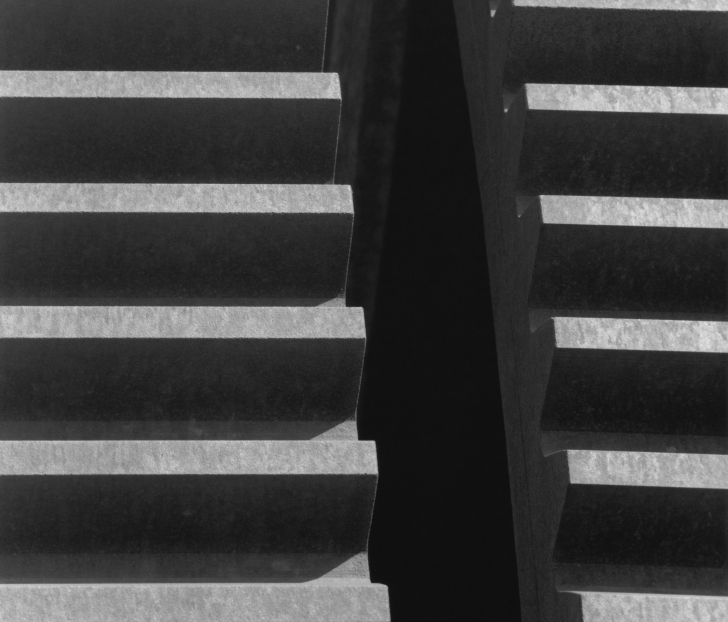 On an (almost too) sunny day in August I visited the marvelous Zeche Zollern, a museum of the LWL in Dortmund Bövinghausen. The coal mine started production already in 1873 and most of the current buildings were constructed between 1898 and 1904. Buildings and interior are in pure Jugendstil (Art Nouveau) and together with the old machinery in and outside they ask for black and white photos shown in this gallery.

The two shaft towers are already visible from the distance and naturally attract the first sighting after entering the large compound of the museum. These are actually not the original shaft towers, but they are of the same type and were displaced from Zeche Wilhelmine Victora in Gelsenkirchen and Zeche Friedrich der Große in Herne. The reflection if the tower of shaft IV in the huge window of the machinery hall was the first motive. The tower of shaft II with the hoisting cable connecting the the machinery hall was the second. Here the blue sky was darkened with an orange filter.

The tracks of the coal loading lead the eye towards the tower of shaft II; again the orange filter was used to separate sky and clouds. The photo named “Sidings” was printed laterally reversed, so the diagonal tracks lead upwards. The crushed rock in the foreground and the far upper right corner was burned in, while the row of wheels was dodged a little. Hinge of the lens and back of the camera was used to place the plane of focus along the row of trolleys. For the photo of the track switch with the little tree growing out of the top ballast the lens standard was tilted a bit forward to get foreground and the back in focus. For the Manual Control Weight a large aperture was used to concentrate the focus on the railroad tie below the handle with its nice texture.

In the yard of Zeche Zollern, a lot of old machinery and vehicles are on display. Two giant Gearwheels, at least 3 m high immediately caught my attention. For the photo I had to wait a about 45 Minutes for the sun to arrive at the right position for the graphical shadow pattern and the slim bright line along the right edge of the left wheel (which actually is brighter in the print than the scan shows).

One of the most attractive architectonic features is the entrance to the machinery hall in pure Jugendstil designed very similar to the entrances of the Paris subway stations. The stained glass windows and red bricks also make great color images; however black and white brigs out the rolling ornaments. The brick walls themselves with the iron framing are nice in black and white when the sunlight hits at the right angle.

The mallet and gat sign (symbolic for the German miners greeting: “Glück auf“) in the window of the great hall of the change house was photographed fully back lit. The last photos were made inside the machinery hall with the amazing marble switchboard and stunning details of the huge electric generators.